Get Ready For Holidays With Storewide Savings

Feni is a unique brandy that is produced from cashew nuts and only produced in the state of Goa, India.

In the traditional method of making cashew feni, only tree ripened cashew apples that have fallen are picked and taken for the crush. The cashew apples are de-seeded and then dropped into the stomping area. This area is called a "colmbi" and is usually a rock cut into a basin shape. The cashew apples are stomped to release the juice. Stomping has now gradually been replaced by the use of a press called a pingre (cage). The pulp is then hand-pattied into small mounds traditionally using a particular vine, nudi, which is snaked around it to hold it together while a heavy weight (typically a boulder) is placed on top. The juice produced through this process is known as neero, and is refreshing to drink. The fresh neero is traditionally in a large earthen pot called a kodem, which is buried halfway in the ground and left while the juice ferments for several days. Delicate earthen kodem have now been replaced by plastic drums for the sake of practicality. The juice is then allowed to sit for three days as it ferments. No artificial yeast or nutrients are added to hasten the process. 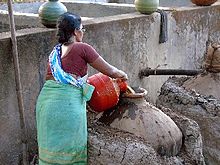 Cashew feni is distilled employing the traditional pot, which is still practiced. A traditional distilling feni is still known as a bhatti. The use of an earthen pot as the boiling pot has now been replaced with copper pots, both known by the same name bhann. The distillate is collected in an earthen pot called a launni. The tradition of cold water being continuously poured on the launni to condense the distillate has now been replaced by immersing a coil in cold water.

Cashew feni is a triple distilled spirit. The first distillate of the fermented neero is known as urrack, about 15% alcohol (30 proof). Urrack is then mixed with neero in a proportion determined by the distiller, and redistilled to give a spirit called "cazulo" or "cajulo" (40-42% abv). Cazulo or Cajulo is again distilled with urrack to give a high strength spirit called feni (45% abv). Note that cazulo is generally sold as "feni", as the spirit is considered too strong of an alcoholic beverage for consumption. All cashew feni now available is double distilled.

Try Feni for yourself